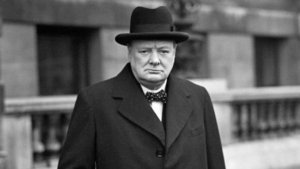 We’ve all read a million times that Churchill had either ADHD or dyslexia or both. Whether he actually met the diagnostic criteria is neither here nor there.

We do know, however, that he was essentially a holy terror when he was younger. He didn’t get along with either his classmates or his teachers. He couldn’t sit still, he was headstrong and he was very stubborn. Who knows what that means when we try to schmoosh him into our current psychiatric boxes. We also know that, in spite of a rather high octane energy level, he was captivated by writing and the telling of stories.

While researching him for a webinar I’m going to do on The Upside of Attention Deficit Disorder, I found an excerpt from Churchill’s memoirs that is just hilarious. He’s describing his initial experience with learning how to read.

“When does one first begin to remember? When do the waving lights and shadows of dawning consciousness cast their print upon the mind of the child? My earliest memories are Ireland.

It was at ‘The Little Lodge’ I was first menaced with Education. The approach of a sinister figure described as ‘the Governess’ was announced. Her arrival was fixed for a certain day. In order to prepare for this day Mrs. Everest produced a book called Reading Without Tears. It certainly did not justify its title in my case. I was made aware that before the Governess arrived I must be able to read without tears. We toiled each day. My nurse pointed with a pen at the different letters. I thought it all very tiresome. Our preparations were by no means completed when the fateful hour struck and Governess was due to arrive. I did what many oppressed peoples have done in similar circumstances: I took to the woods.”

I wish we could all frame our frustrations so eloquently.

About the Author: Michael Hart

What peoople are saying…

I was in a graduate level course that Dr. Hart facilitated. Dr. Hart was beyond helpful in assuring that my understanding and comprehension of the course’s content was well established. His class, Advanced Educational Psychology, allowed me to improve my teaching through my own learning.

Dr. Hart was very thorough and helpful when I had questions. I was skeptical of this course because I have always disliked Psychology courses….until this one! Thank you for making it interesting! (BTW I never comment on surveys! You definitely made a great impression on my learning experience!) Thank you!

I enjoyed this class so much. It gave me the opportunity to look at other viewpoints and the freedom to disagree with those viewpoints. I felt comfortable expressing my opinion and my hard work was rewarded. I wish that Dr. Hart was my professor throughout this entire program.

Any cookies that may not be particularly necessary for the website to function and is used specifically to collect user personal data via analytics, ads, other embedded contents are termed as non-necessary cookies. It is mandatory to procure user consent prior to running these cookies on your website.